Spear’s is pleased to announce the winners of the 2014 Spear’s Wealth Management Awards, held on 27 October at The Savoy.
The Awards celebrate high net worth individuals and wealth managers for their successes, innovations and acumen in the year 1 September 2013 to 31 August 2014.

See photos from the event here. 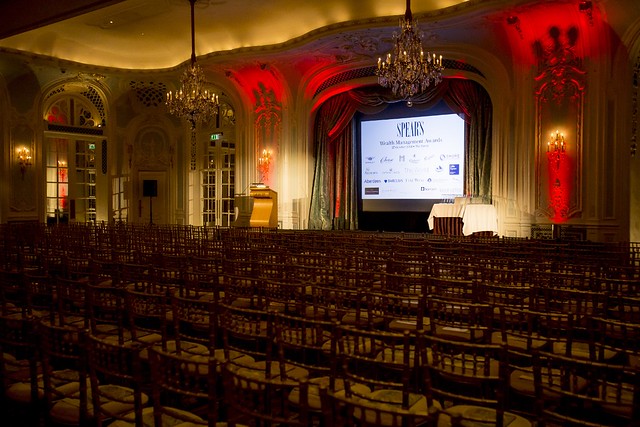 Private Bank of the Year
Sponsored by Aberdeen

For a bank that has delivered outstanding service and performance for HNW individuals during 2013-14. Attention will be paid to factors including changes in client-facing head count, retention of top staff, changes in assets under management, market performance, broader services and innovation, as well as client feedback.
Citi Private Bank
C Hoare & Co
HSBC Private Bank
Julius Baer
RBC Wealth Management
Private Banker of the Year
Sponsored by Bentley

For an individual aged under 35 in 2013-14 who has demonstrated outstanding leadership in any of the wealth management and private client industries. They will have demonstrated their potential through progression at the firm in addition to peer reference.
Matthew Conradi, Julius Baer
Sophie Jewson, Sarasin
Joanna Livesey, Citi Private Bank
Jack MacDonald, RBC Wealth Management
Will Walker-Arnott, Charles Stanley
The Next Generation award
Sponsored by Kaiser Partner

For an individual or firm which has provided an outstanding strategy or programme to support next generation clients in the management of wealth and responsibility in 2013-14.
Close Brothers AM and Cause4: Trustee Leadership Programme
EY: NextGen Academy
Institute for Family Business and with the Unquoted Companies Group: Next Generation Leadership Programme
Oliver Stanley: Sailing boot camp
Stanhope Capital: An Introduction to the City
Asset Manager of the Year for High Net Worths
Sponsored by Shore Solutions

For a majority family-owned and -managed business that has demonstrated outstanding performance and/or service during 2013-14. Attention will be paid to corporate profile, good practice and increased market presence.
Banque Havilland
Cadogan Estate
Ettinger
Pentland Group
Shepherd Group
Entrepreneur of the Year
Sponsored by Barclays For an individual who has undertaken outstanding philanthropic activity during 2013-14. This activity may be in the form of a direct gift, the establishment of a foundation or the achievements of an ongoing foundation. The individual will be recognised for their contribution to philanthropy, their vision and their innovation.
Sir Richard Branson
Sir Thomas Hughes-Hallett
David Ross
Jonathan Ruffer
Jessica and Adam Sweidan
Judges: Anna Josse, Prism the Gift Fund, and Randi Weaver, Good Giving Global
Property Adviser of the Year
Sponsored by Lillie Square For a private client accountant who has provided outstanding service during 2013-14.
Dermot Callinan, KPMG
Graham Chambers, Dixon Wilson
Paula Higgleton, Deloitte
James Sykes, Saffrey Champness
Wendy Walton, BDO
Judges: Sue Laing (Boodle Hatfield), Jonathan Conder (Macfarlanes)
The Spear’s City Champion Award
For a person, company or scheme which promotes the higher moral aspirations they have for the City and provides an example to others, using their resources for the good of our broad community and society as a whole
Alan and Gina Miller
The Spear’s Trusted Adviser Award
Sponsored by Close Brothers Asset Management

For the wealth management professional across any field who has best demonstrated in 2013-14 their indispensability and excellence to their clients beyond their normal role.
Ceris Gardner, Maurice Turnor Gardner
Spear’s Lifetime Achievement Award for Outstanding Contribution to Wealth Management
Sponsored by Captain’s Choice

For a visionary individual who has made a significant impact on the wealth management industry either as a banker, wealth manager, lawyer, accountant or in any other relevant capacity.